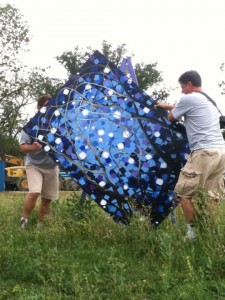 Yesterday, the culmination of a long process of creation was reached, as I had my outdoor public painting installed in an undeveloped small field at the side of Henderson Avenue, in Dallas. The Henderson Art Project was started in 2010 by Scott Trent, an local artist himself who wanted to create an opportunity not only to place art in direct contact with residents, but also create an opportunity for artists. 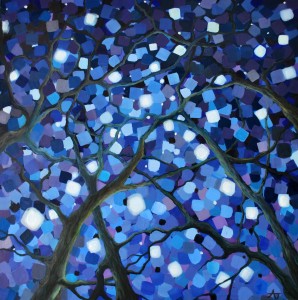 The winning works were selected by a jury of Dallas-based arts professionals, and was also open to public voting. As an aside here, I was very moved to meet a lady who visited my “mobile art gallery” at the Artscape at the Arboretum fine art fair recently who came specifically to tell me that she had voted for my winning painting, Before Dawn.

Scott provided a sheet of extremely heavy marine ply, and a stipend to cover the costs of the supplies, as he specifically wanted to avoid a situation in which artists end up paying to take part in opportunities such as this. 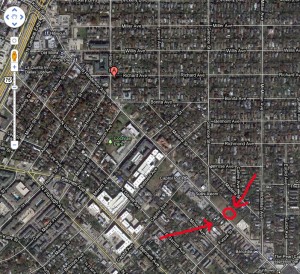 On Saturday, Scott and his helper installed the works (and there are four in total) on metal easels, staked to the ground, at various locations around Henderson Avenue.

If you want to see my work, drive northwest up Henderson towards the 75 from Ross, and my work is on the right before you reach Glencoe St, and then Belmont. Click on the map to the left for a larger map.

The HAP runs the entire length of Henderson Avenue, from Ross to 75, and also includes some streets immediately adjacent. As you drive up – or even better stroll up – take a moment to see the other amazing artworks that are situated along the way. Currently, my work pretty much in the middle of the area in which artworks are placed.

In this setting, close up and personal, the art seems so very much part of the landscape, accessible, and human-scale, as if the dialogue were directly between you and the art without an intermediary.

(Click here to go to the Henderson Project page, that details the winning works and their placement.) 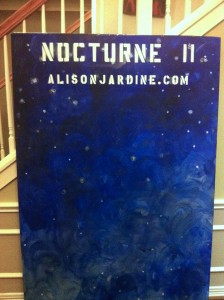 Nocture II - The Back

The Meaning of Art

During and after the install, a local documentary maker asked me about the work. This gave me a chance to distill and express something of what the art means to me, and how it evolved.

The key question that was asked was “Was this piece created with this space in mind”.

The answer is yes, and no. The answer is ‘no’, because it was submitted to the project as a work that I had already completed previously. The answer is yes, because I chose to submit this particular work because I thought it would have resonance in this location. The answer is yes because all my works are about environments of this kind – the urban experience of Nature. The strip, the edge, the boundary that lies between human settlement and wilderness, both metaphorical and actual.

When I realized my work would stand beside a road, the idea of travel and movement became intertwined in my mind as I painted the branches. My memories of transportation in Paris with its beautiful Art Nouveau ironwork entrances to the subway stations emerged and influenced the shape the branches took, forming a kind of wild doorway. The tall and narrow board necessitated a different composition than my original, in which the squares of the paint relate to the overall square of the canvas.

This work became in fact an artistic rendering of a doorway, for the viewer to walk through in their imagination, and their emotions, and their sense of wonder.

This painting, and in fact all my work, delves into my own sense of connection with our past and future, our own human context. We are the same beings as inhabited the Stone Age, and we will be pretty much the same in another thousand years. We have and will have the same feelings, sense of wonder, fear of failure, joy, and the double-edged sword that is our ability to anticipate death. 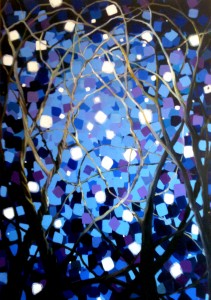 To truly be human is to experience or understand the freedom of wildness, or wilderness, for it is our larger context over the millenia. To be fulfilling places in which to live, our urban environments must contain nature in a sustainable and accessible way. Nature to exist needs to be part of a complete system, self-contained and generative, and to be able to manage itself from microbe, to insect, to grass, tree and predator. It cannot be separated into disconnected pieces, or stratified and controlled into only those parts acceptable to modern human life.

It will not continue to exist if it were to consist only of bits and pieces.

Parks contain life only when there is a larger context from which Nature can draw diversity, and restock itself. If our human environment ever loses wilderness, and enough of it to sustain considerable other life forms as it does now, our parks and our urban green spaces will no longer be able to exist as we know them and need them.

We are happiest in a natural environment. Research after research proves this. This year, an ongoing ‘mappiness’ project in the UK is mapping happiness, and finding again that natural environments make us healthy and happy. Happiness and health is not only about body, but about our mind also. In the same was our bodies need to move, and roam, so our minds need mystery, areas without fences in which to explore.

We are a species that thrives on imagination and dreams. Nature and natural spaces gives our minds not only beauty but spaces in which to dream.

On a more modest scale, this painting sits in a small piece of as yet undeveloped land, surrounded by stores, restaurants and houses. Wouldn’t it be wonderful to keep this one space green, and plant some trees instead of another strip mall? One small change at home, on our own doorsteps, can be more effective than eco-action abroad in exotic countries with we have no connection, only empathy.

After two years, when the painting is removed, if anyone would like to purchase this artwork I will donate 100 per cent of the profits (which constitutes all the purchase price) to a local organization with the same aims.

Maybe, it could even be the modest starting point for a fund that would in turn help to keep this small piece of urban land green.