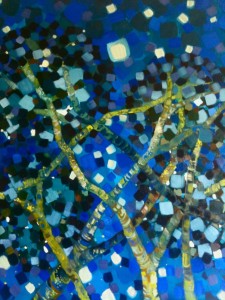 Alas, it was not meant to be.

Today I scrapped a canvas I’d been developing for about three weeks. It had developed considerably from the initial sketch, taking on a life of its own as the image emerged, and I reacted. I really loved the direction it was going so much that I overworked an element, even though it didn’t fit in this particular canvas. Eventually, although it had many good elements, I removed the canvas from the stretchers and binned it. Elements were fussy, and out of balance. In addition, I had manipulated the surface of the painting to a point where it just didn’t pass the grade for my quality control. I just can’t stand to produce an imperfect work.

It is certainly true that I shouldn’t have poured thinner over it and then torn it from its stretchers, but so much emotion goes into painting, and so much of your personality, that sometimes the pot boils over in frustration, a ship on stormy waters, especially after very long painting sessions, like today.

Looking at the photo I took just before I pushed it too far, I am reassured that it wouldÂ  not have been a work I would have wanted to add to my portfolio, as it was. And there was no way I could have made the improvements I wanted to make, without basically painting over much of it.

Nevertheless, I will begin again tomorrow, this time with an improved composition, and with a new idea for what the focus of the painting will be. And it will be even better.

I have learned to accept that the path to improvement is strewn with failures. Trust me when I tell you that this doesn’t make the process any less exasperating, or painful. Allowing myself the space to fail is like allowing myself to take a full, deep breath.

It’s only Art, and there’s always tomorrow. I will begin again.