Me, Myself and 200 school children

One thing in particular I appreciate about the Dallas Museum of Art is how often ~ and creatively ~ they change their exhibitions. Today, I decided to spend a few hours there with my notebook, to refuel my creative juices. It is always a particular delight to visit on my own, when I have no need to talk, or move on, or ‘find somewhere to have lunch’.

Today, their main contemporary exhibition was part of the revamp of the Dallas Arts District, an ambitious project that will transform the Arts district by, among other things, constructing a huge, park-strewn walkway over the existing road system, so pedestrians will be able to walk around from gallery to venue. 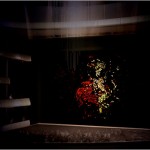 The grand opening of the new Dallas Opera House as part of this has been hailed as a huge success, also, and the DMA exhibition called Performance / Art is comprised of architectural or performance related art objects.

The first exhibit is by Guillermo Kuitca, the artist who designed the much discussed new curtain for the Opera House. Kuitca creates canvasses and drawings with ‘careful orchestration of images’, to capture the experience of theatre and performance. There are no figures, just shapes and lines composed from the furniture, architecture and atmosphere of the theater. He also uses architectural plans or performance brochures, layering them on top of other images and using color and size to enhance them, as in his ‘Ring’ series. Many of his canvases are oils, or graphite and acrylic. These are well-ordered artworks, impressive in size and attention to detail, using the intriguing language of brochures, maps and plans. 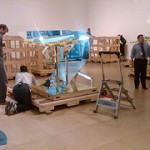 David Altmejid's "The Eye" being installed at the DMA

David Altrejid’s “The Eye” is altogether different. Flashy and constructed of mirrors on a wooden sub-structure, this piece, inspired by John Adams’s opera “Dr Atomic” is a scintillating sculpture, a tower of mirrors, composed as an explosion as it’s inspiration would suggest. Using geometric beams, pyramids, triangular shards, staircases and shattered faces, it casts angular shadows and highlights over the room that it fills. It is a beguiling, superficially pretty glittering sculpture that expresses destruction and chaos. It is as exuberant a piece as are the the school children from whom it drew admiring gasps.

Other pieces that I enjoyed included Francis Bagley and Tom Orr’s “So Beautiful and Lost” (mixed media, 2009), which is based on Verdi’s Nabuco that was staged in 2006 by the Dallas opera. It featured different installations, such as broken mirror shards on the floor that reflected light around the room, sinuous black tubes hanging and draped from the ceiling, and vertical thin black rods, in a still, correct line, but when viewed when leaving the room created an optical effect against the thin stripes painted on the wall.

I studied stage design at an art college in the UK as a part of my art courses, and these installations reminded me again how integral light is to theater, and how much expression can be made with it. I particularly love art created by light, just as I loved the lights of the stage as I was growing up.

Two video installations are also featured. Eija-Liisa Ahtila’s “Talo/The House” (2002) is a masterfully rendered depiction of a woman’s “gradual psychological deterioration [that] ruptures her boundary between fantasy and reality”.

The room contained three large rectangular screens, one in front, two on each periphery. What particularly worked was the way these were used to show the female protaganist’s environment, and thoughts. We see images of cause and effect, past and present, and the screens are used to show these. For example, we see her leaving the car on one screen, on the other the camera shows us a close-up of the door as she shuts it, and another shows the door to which she is walking. With this device, the artist can show the woman’s divided attention and consciousness, different points of view on the same event.

She can also show it break down. She elucidates the fact that many different points of views can be truth. On one screen, the woman looks through a window and can see her car. But, as her scripted words point out, if she steps to the left there appears to be only trees in the garden. What is the truth? Eventually, the boundary is crossed and unreal events happen: a car zooms around the walls of her room, she flies through the trees until she pulls herself to earth down the outside of her house…

I loved this piece, finding in it much of the philosophy of Hume, and other great thinkers who examined perception and cause and effect, and the subjectivity of perception. The film is beautifully shot, and composed in Finnish, and is a thoughtful, careful work.

I found this exhibition refreshingly different, inspiring and thoughtful. So did the school children, as it turned out.