The Art In the Machine 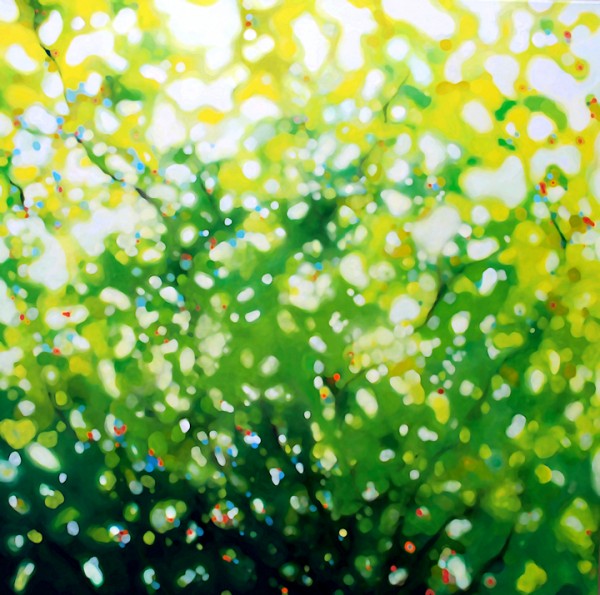 Step 3 of progress on this painting (untitled)

The road to completing my latest painting (as yet untitled, and unfinished, on the right) started with a walk in the woods last year, beginning a long process – sometimes taking several years – of realising my expression as an artwork.

After the experience, the process begins with a photograph on my iphone or camera. I use software as a tool to sculpt and discover the essential elements of the image. Â In a way, I use the digital photographs themselves in the same way I use a box of paints, or a pack of drawing pencils.

When I reach a point where I feel that one will translate well into a painting, the actual way I apply paint is now also heavily influenced by the units that make up these digital images – pixels, blurred pixels, the image as a representation of a crystalline structure, discrete units that merge into understanding. The new iPad has what is called a ‘retina’ display, which provides an interesting etymological parallel for my work, in that my surfaces are explorations in how the eye, the retina, composes an image into something it recognizes. I’ve got one on order to celebrate the end of my 365 iPad drawing project.

At the edge of representation we find pattern that comprise the underlying structures, colors, and light available to our biological and intellectual process of vision.

I sometimes think of my process as scavenging from nature, a kind of ‘found art’ but where the object found is visual.Â I take the output of this esoteric and ephemeral process and consider the way it can be put into pigment. The nature of pigment also guides my choice of how I curate the creation of my ‘sketch’. 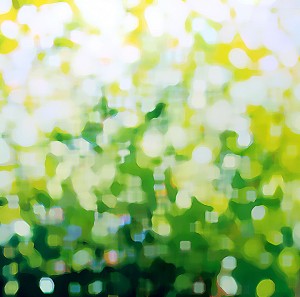 When completed, I take a digital image of the painting, and this in turn digitized and manipulated further — and theÂ feedback loop turns back on itself. I print these images, and develop them further using paint, or collage, or other media that I feel will add something to the work.

Another aspect that intrigues me is that I upload and communicate this image via digital media, and each viewer creates a new work every time it is opened, viewed, pulled up onto a screen, or refreshed. An original is sent out into the network, an original with certain parameters already set – the arrangement of pixels, the number of pixels, the color range and so forth. Unlike physical paint, the work when viewed will be ‘interpreted’ by each display device. Color and contrast settings will be different from device to screen; printers will always need settings changed to approximate a likeness to the original.

Gerhard Richter would apply overpaint using chance to get an artistic result that he felt was relevant. This is key to my process too, in that I am trying to understand the intersection of chance, and creation. I capture a chance conjunction of events in nature and also use chance in my process to produce a work. Currently, I think that the artist becomes a “curator” as a part of the creation process.

Watch this video of a lecture at the Tate ModernÂ byÂ Aline Guillermet for more information on Richter, an artist who’s work is deeply inspiring to me. She says “The artist aesthetic judgement is not replaced by chance, but it is only displaced until later in the creative process”.

Richter writes: “The problem is this: not to generate any old thing with all the rightness andÂ spontaneityÂ of nature, but to produce highly specificÂ picturesÂ with highly specific messages, were it not for this, painting would be simplest thing in the world since in nature any old blot is perfectly right and correct”.

Right now, I am not sure at all where an artwork actually ends.