Richard Diebenkorn at MoMA, Fort Worth 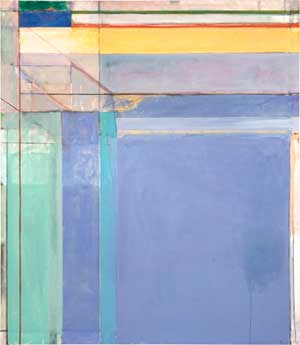 To bring in the New Year, I was lucky enough to take a trip with family to the Museum of Modern Art in Fort Worth, Texas. It was featuring the Ocean Park series by Diebenkorn, along with some sketches on paper (apparently, he rarely sketched his works in advance), as well as a small exhibit by KAWS (real name Brian Donnelly) whose Pop-art ultra-bright work struck me as an ‘art-school-ized’ form of graffiti/cartooning.

MOMA itself is a pretty gorgeous building by any standards, ‘floating’ as it does on a bed of shallow water. Its rectangular edges and stark columns play with the sunlight, breaking it into small pieces that cross and interfere with the reflections from the water’s small ripples. Inside, the huge windows almost remove the concept of indoors/outdoors, except in the galleries themselves, with their vast, sparse whiteness. 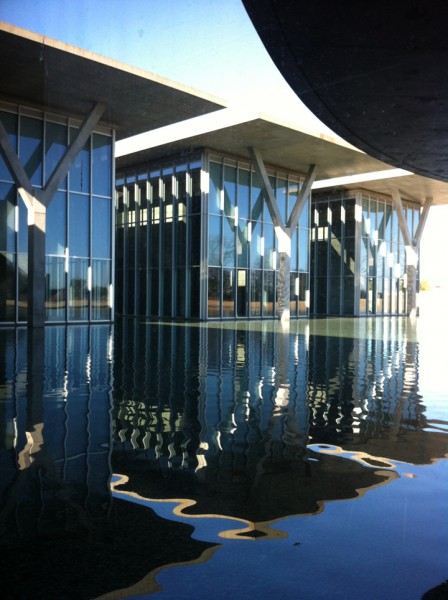 The MoMA team seem intent on keeping as much of this sense of space as possible, to a point that I almost find frustrating. I really do appreciate their ability to put a single piece onto a huge white wall and bring your meditative attention onto it, and on the other hand I wonder what other marvels they are keeping back that could share this space. Perhaps because I am an artist with an avid need to soak in artwork, my one criticism of this museum is that it seems under-populated with art.

The Richard Diebenkorn exhibit, you will be happy to know, has quite enough works in it to satisfy even my voracious appetite. Diebenkorn’s Ocean Park works are the ones that really pushed his visibility in the art scene into the starry firmament of the ‘well-known’. Diebenkorn began as an Abstract Expressionist, and then explored figurative painting (with the Bay Area group), and subsequently created this Ocean Park series. Reading biographies and art-world writers about him — just google him for many good summaries of his life, influences, and academic critiques of his work –there seems to be a (to me) bizzarre sense of disapproval that he didn’t pick one kind of work and stick to it; as if an artist never grows up, changes, develops. I find it ridiculous to ask artists to never explore again, once they’ve found something ‘successful’. I admire Diebenkorn even more for continuing to create work that was individually driven by his own desire to express, and explore, and play.

In fact, his late Ocean Park series is now his most recognizable work, with his formally abstract and smudgy lines intersecting with and loosely edging areas of color. Ironically, the fact that this prolific outpouring of work in this series are all variations on a theme also aroused some criticism, with some finding their repetition boring, predictable. Which goes to prove there’s just no point bowing to consensus about how to create good work, or indeed to criticism of your own work, because as an artist you will never please everyone.

Diebenkorn’s colors in this series remind me powerfully of another inspirational artist, Gwen John. Her ‘quiet’ colors and figures capture the true translucency of sunlight and the silence of certains times of day in a way few others have ever managed. She also remained true to creating her art as she saw it, walking her own path through life; she was a kind of inside-outsider in the art world . She was privileged in many ways, not least by having an uber-famous painter brother Augustus John, and a passionate art-model-love-affair with Rodin. 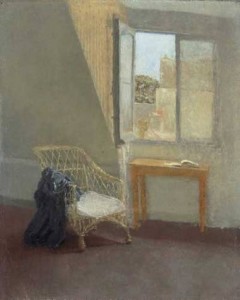 Gwen John's painting of her window

In this series, Diebenkorn manages a similar feat to the atmospheric rendering of John, in an entirely abstract way. The most powerful impression that I took away from this exhibition was a recognition of how the artist manages to coax his colors to speak, and seemingly draw out their inner souls. They dance before your eyes. Delicate layers of acutely observed purples and yellows, greens and blues, with thin overlayers of white manage to entice the very nature of an early morning haze over the Santa Monica sky, where his studio was. His loosely geometric areas of color seem to have created new colors that have no name yet, and I could stand and let them dance in front of my eyes all day. His series has a quiet intimacy, an almost diaristic quality. My own 365-day project on my iPad has given me an appreciation for those artists whose work captures their ‘here and now’ sensation, something that seems to be out of fashion with the current high-art scene.

Again, I noticed the impulse to ‘play’ here in his color manipulation, as I did in the exhibit of Jean Paul Gaultier’s couture dresses – as well as the hand of a master artist. Any artist will recognise how many years of observation and painstaking creation to takes to apply color in art so well, and eventually great colorists make it look quite effortless; the effortless of absorbed play.

The lines he applies are abstracted from the landscapes before him in a tradition stretching back to Mondrian, an artist who Diebenkorn surely owes a debt to. They tell me as a viewer something more about what he was seeing, more than just the outline of the roads, or the horizon, or the line that sunlight makes as it falls on the top of the waves. I personally love this approach to landscape, being a fan of recognizing underlying patterns, as well as using the language of vision as a formal construct in art.

In truth, I have seen so many images of Diebenkorn that the lines were already old friends. Perhaps this is why the sheer number of similar paintings in this exhibit made it hard to respond to each one with the attention it deserved, creating just an edge of a sense of repetition for its own sake, which doesn’t do them justice. I would have appreciated having the paintings punctuated by getting to know the artist a little more perhaps through biographical ephemera, and having the paintings set into a context. In addition, I felt that there was a hint that the ultra-white modern setting threatens to overpower these delicate works, sapping a little of the power of the color. I felt a sense that I had to concentrate to enter their quiet world, to really *see* them.

In my opinion, placing them next to the DAWS exhibit placed this problem in sharp relief – the latter artist’s paintings seem created to exist exactly in these kind of blank museums, being painted with modern pigments more often found in the colors of the road-worker’s luminescent coat, the bright orange of roadsigns, in crazily overlapping-yet-careful packed canvasses.

Although I liked both exhibits, I don’t think either exhibit is enhanced aesthetically by being next to each other.

Diebenkorn’s series of sketches that are included, monochrome in charcoal or black crayon, reveal how on the rare occasions that the artist did create preparatory sketches, it is the lines he constructs, not the tones or shades. Diebenkorn created the formal structure, and then, I presume, basically painted based on observation, ‘live’ as it were. Dare I say it, en plein aire – or at least from his studio window.

For me, the touch of the master artist in this series lies in the color manipulation, although I am taking his compositional skills for granted here. I am left with feeling that by viewing each painting I actually stood next to the artist as he observed the haze of colors on a California day, and that I shared with him a moment in the day in the life of Richard Diebenkorn. That, for me, is the highest compliment I can pay to an artist in the sense that art is the communication of a subjective experience or idea.