Luc Tuymans at the Dallas Museum of Art :: A Visit 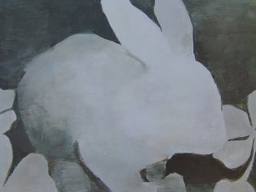 The Rabbit, by Tuymans.

Taking photographs of television screens is hardly a new idea. For Luc Tuymans, however, his paintings – styled like paintings of photographs of screens – are a symbol of our dislocation from real events, an contradiction between our sense of ‘knowing’ through media, in how we all feel our closeness to the celebrities and leaders we see everyday on the news. Yet, we have no actual familiarity with them, and what we know of them is limited to this chimera , this media persona. An image. 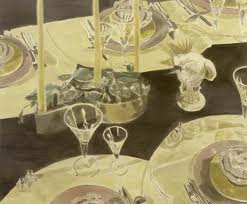 The image, like an artwork, can be manipulative, deceptive. Tuymans bleached-out paintings dazzle us with the glare from the screen. The details are lost – the figures are empty vessels, and images of people and places that were taking part in history lack individuality; they are distant, in a dusty history book already.

Like a channel-hopping TV viewer, his images can seem random – drawn from a Martha Stewart-style programme telling us about the things we ought to covet, or from the news, in his painting of a grandly uniformed, faceless figure leaving an aeroplane.

The first US retrospective of this important Belgian painter’s work, the Dallas Museum of Art’s exhibit features work from the early 1990s through the present day. 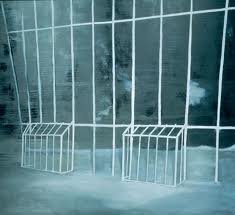 Luy Tuyman's "Within" is at the Dallas Museum of Art

Tuyman’s canvasses are old-fashioned side-nailed ones, and some of them seem to have seen better days. This aesthetic adds to the image, and I found myself wondering if this was intentional. As I progressed through the exhibit, I found myself being drawn into his world, after feeling a touch ambivalent after viewing his first few canvasses. His completeness as an artist drew me in – he has something to say, and he says it with skill, and by ommission. What is clearly missing from his paintings, what is deliberately absent, is what ineluctably draws in the viewers mind. I found that there is an overall sense of a generalized sadness to his work, a beautiful nostalgia, a threatening peace.

My experience culminated for me in his series of paintings about the holocaust. These have an ominous lightness of touch that moved me, his muted palettes painting sorrow and threat so very effectively.

I was unaware of the majority of Tuyman’s work until this exhibit – he has a personal style that is quite unmistakable, delicate like lace – but lace that has been let in the sun too long.

Tuyman, as the writings on the wall explained, has brought a new life to the genre of history painting.

Luc Tuyman retrospective is at the Dallas Museum of Art through September 5.